Teen heroin use is on the rise again. Heroin use can result in significant health problems including overdose and death; and, if sharing needles or other injection equipment, exposure to HIV, hepatitis C, and other diseases. SAMHSA reports, "heroin is a highly addictive opiate with a large potential for abuse. It is a danger to teens, resulting in serious psychological, social, educational and legal consequences." This program interviews recovering teen heroin addicts to tell their cautionary stories...When, how and why did they start taking heroin? What damage did it do to their bodies and lives? How hard is it to stay clean? How many friends have OD'd on heroin? Drug abuse counselors add their advice and guidance on how to avoid this deadly drug.

Highly Recommended.  “Irresistible.” This one word heard at the opening of Heroin Rising, sets the stage for this first-rate program on heroin use and addiction among teens and young adults. Featured in the film is an expert in drug abuse, health care providers, and most importantly recovering addicts. A brief background on heroin as a drug of choice is followed by the ease with which teens are finding their way to heroin through prescription drug abuse. The reputation and stigma associated with heroin as a “dirty” street drug can be quickly bypassed by using prescription pain killers—which in some cases are merely heroin in a more acceptable pill form.

Valuable testimony from former heroin addicts is a highlight of the film. Hearing their experiences, particularly the agony of coming down from a high and the self-degrading behavior necessary to feed their addiction, is downright palpable. The science of how heroin works in the body is explained using clear, concise animation. The after effects of heroin use and how it affects the users family and friends is also covered, as well as personal stories of overdosing and the harrowing guilt and other psychological issues that stick around for years if not a lifetime. The irresistibility of the drug is further enforced by the cautionary message from a former user, “You’re playing with life and death when you pick up the first one.” The film ends on a positive note, as suggestions for users to get clean (or not even start) are touched on throughout the program and come to a gentle yet firm conclusion.

The technical aspects of the film are of high-quality, and this Human Relations Media production is a little more polished than some with effective music and editing techniques. Highly recommended for high school media center collections, as well as academic library collections in education, counseling, and health sciences.

The compelling testimony from attractive and young recovering addicts brings the objectives of this program straight to the viewer's attention. Coming from a young man who overdosed on heroin numerous times, the statement, "You're playing with life and death when you stick a needle in your arm" rings true. The appearance and intelligence of those interviewed are evidence that heroin addiction affects all socioeconomic and ethnic groups. Reenactments of shooting up, succumbing to the initial high, and collapsing in an overdose are performed subtly, without excessive drama. Also included are statements from experts, including Michelle Lipinski, of Northshore Recovery High School, Beverly, MA; and Tom Janette from the Narcotics Enforcement Officers Association, Wallingford, CT. The current rise of heroin use and addiction is explained by its ready availability and inexpensive cost compared to similarly addictive prescription drugs. Throughout, "Spiritual Displacement," a melancholy song about addiction written and performed by Sean McVerry, plays in the background. In addition, the teacher's resource book provides the usual HRM resources: pre/post-viewing quiz, video summary, National Health Education Standards for both grades 6–8 and 9–12, additional online resources, and the moving lyrics to McVerry's song. An excellent program about a growing current issue and worthwhile for all youth. 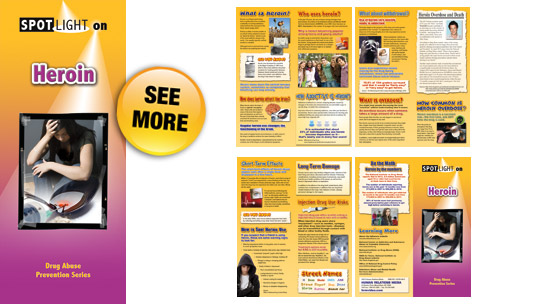